Saturday’s Paddle on the Ottawa River

Saturday January 12, 2013 was a beautiful day for a paddle on the Ottawa River.  Kevin, Dave and I started out around 11:30am.  The wind was a little brisk blowing against us.  As the river narrowed the wind got calmer and it was a lot warmer and easier to paddle.

As we paddle up the river we came upon some ice that stretched across the river.  I told the guys I was going to paddle really fast and I was either going to slide right up on the ice or break right through it.  The noise breaking through the ice was really loud.  It was so much fun.  So I made a path for the two guy to follow behind me.  There were a couple other spots that had ice across the river.  This was a first for all of us paddling through ice.

The further we paddle the warmer we got.  Then we came upon the train bridge and on the other side was rapids and a drop down of about 8 in.  Kevin tried to paddle through that but was forced back by the current.  He decided not to try it again fearing he might tip over.  If it would have been a lot warmer we might have tried to get through it.  That is where we turned around and started back.

Returned back around 4:30pm.  It was a great experience with the ice and just getting out and paddling.

WAS A REALLY GREAT DAY!

Apparently WTVG got wind of this winter paddle and obtained a picture of Lorraine and Kevin getting into their kayaks, showing it in the 6 pm weather segment!

Click the link below, to view the video clip: 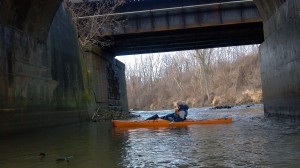 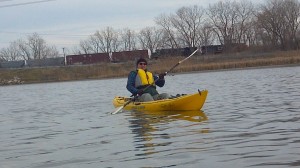 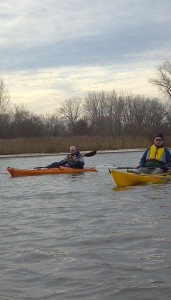 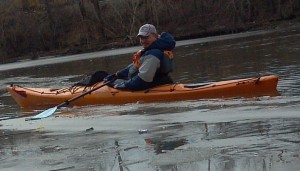 Kevin breaking  the ice that was left 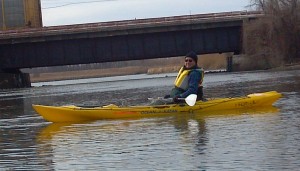 NWORR.ORG
NWORR is an organization based in Northwest Ohio for families and individuals who love the water and kayaking.

Ultimate fishing Show2013
January 22 next meeting with guest speaker – Geoff Cornish!2013
We use cookies to ensure that we give you the best experience on our website. If you continue to use this site we will assume that you are happy with it.Ok