Kayakers take the slow lane to commune with nature 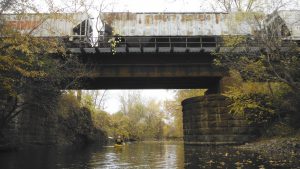 A kayaker with the Northwest Ohio River Runners passes under a train bridge on Swan Creek. Bob Pulhuj

Fall can mean a momentary glimpse of color viewed from the closed window of a car moving down I-75. Or it can be a slow unveiling of nature’s IMAX screen, spread out in a 360-degree panorama, and one that softly and silently swallows you in its broad billboard of hues and tones.

Bob Pulhuj prefers the latter, allowing autumn’s palette to surround him as he moves across the surface of Swan Creek at a nautical crawl. When the curtain goes up and fall’s brightest crimsons and deepest yellows are on display, the best seat in the house for Mr. Pulhuj and many who share his perspective, is tucked in a kayak.

“Down on the water, you can see so much that you will never see from the bridge or the roadway,” the retired UAW electrician said.

Mr. Pulhuj is relatively new to this endeavor — his first kayak outing took place just five years ago — but he is more than a convert. He is now a missionary, an evangelist, and a recruiter for kayaking.

“It’s such a great way to see the world from a completely different angle, and fall is one of the best times of the year to kayak,” said Mr. Pulhuj, who lives near the Ottawa River in Point Place.

“It’s not as hot now as it is in the summer, and there’s a crispness in the air. You can comfortably spend more time on the water, it’s quiet and peaceful, and the fall colors just make it so much better.”

Mr. Pulhuj is a member of the Northwest Ohio River Runners, a loosely organized group of kayakers and canoeists that prefers the self-propelled approach when plying area waterways. They contend that some of the best autumnal sights are found right in our backyard, so for two weekends this month, they are holding the informal “Fall Color Kayak Tour of Swan Creek” and extending an open invitation for any interested party to join them.

“In the last two weeks, we’ve seen a lot of change in the trees, and the colors are really coming on, so this is a great time to kayak and take it all in,” Mr. Pulhuj said. “And since the sun is going down earlier, it’s tough for a lot of folk to get out on the water after work. We want a lot of other people to see what we see, because you haven’t really taken in the fall colors around here until you’ve viewed them from the surface of the water.”

Lorraine Schlipf of Toledo kayaks locally, and also on the Detroit River. She includes the Maumee and Portage rivers on her list of the best area waterways.

“Oh my gosh, the trees are so beautiful from down there on the water,” she said. “You are moving slowly, so you can see everything. You view the trees from the bottom side up, and when the sun is shinning on them, you get a totally different glow and a very nice perspective.”

The group’s next kayak tours of Swan Creek take place Saturday and Oct. 19, and depart at noon from the Swan Creek Landing next to the Toledo Farmers’ Market. They have loaner kayaks and canoes for first-timers, and they can cut short the 2-3 hour trip if an individual is not up for that long a venture. Inexperienced paddlers are always paired with one of the organization’s veteran kayakers.

“The pace is very casual, and that is intentional,” Mr. Pulhuj said. “There are a lot of people who have very stressful jobs, so this is an opportunity to come out, enjoy the cooler weather and the fall colors, and relax on the water.”

Toledoan Dave Zobler lives near Cullen Park, which sports a new kayak dock that was made possible by significant donations by kayakers and volunteers. Mr. Zobler kayaks the Huron River in Michigan with his grandchildren, but said Swan Creek offers a more intimate association with autumn’s splendor.

“What makes Swan Creek especially nice is the tight canopy created by the trees being so close to the water, and all of their branches extending out over the water,” he said. “I look forward to seeing the fall colors along Swan Creek, but they last such a short time that you really have to take advantage of it while you can. You can’t afford to wait.”

A bonus on each kayak outing comes from the array of wildlife along the various waterways. There are critters in the water, on the water, and living in the trees, brush and undergrowth that usually stretches from the water’s edge to above the top of the bank.

“There will be fish jumping, geese, ducks and birds, egrets roosting in the trees, muskrats, and a lot of deer,” Mr. Pulhuj said. “I’ve seen huge bucks down there. All of this wildlife is right here in the city, but you would never see it from the road. The only way to see it is to be down on the water.”

Mr. Pulhuj said a kayak trip down any of the area streams and rivers also provides a unique look at the bridges that cross these waterways.

“It is impressive to see a huge railroad trestle bridge from below. You get very close to those massive supports and you see the foundation it takes to hold up one of these structures,” he said. “And there’s nothing quite like the sound of a train going over one of those trestles as you are paddling along underneath it. There’s all of the squeaks and sounds, but you can also feel it vibrating through the water.”

Past Northwest Ohio River Runners’ outings have attracted paddlers from 12 to 86 years old, and Mr. Zobler stressed that the sport appeals to all ages.

“Kayaking gets everyone closer to the water, and you can observe much more of nature’s beauty than you can in a boat,” he said. “There’s a lot of stress on people today, and this brings you quiet and solitude. People aren’t aware of everything we have around us, so it’s really important to get out and enjoy things like this.”

If you go: The NWORR “Fall Color Tour of Swan Creek” takes place at noon both Saturday and Sunday, launching from Swan Creek Landing, next to Toledo Farmers’ Market, and is open to everyone. Paddlers are asked to be there by 11:30 a.m. A limited number of loaner kayaks and canoes are available to those 18 years of age or older, and those accompanied by an adult. Reserve one of these loaner craft by emailing nscaleloco@yahoo.com and placing “Swan Creek” in the subject line.

This entry was posted in In The News. Bookmark the permalink.